December 2013: The Visible Hand: Social Enterprise, Values and the Future of Entrepreneurship

Plymouth has recently been recognised as the UK’s first Social Enterprise City, building on a vision inspired by a network of social purpose businesses across the city who, a few years ago, began to ask “What would it be like if all businesses operated for social purpose?” “What if the economy of a whole city, country or even the world was dominated by activity which had social and environmental aims at its core?” This vision, of a world in which social and environmental benefit and costs are factored into the business model and where societal and individual wellbeing, fairness and sustainability are the reasons for going to work, has been championed by Plymouth’s growing Social Enterprise Network and is supported by an increasing number of people and organisations across the city. Plymouth University is a member of that Network and holds the Social Enterprise Mark, the only University in the UK to do so.

Social enterprises are businesses with “primarily social or environmental objectives, whose surpluses are principally re-invested for that purpose in the business or community, rather than mainly being paid to shareholders and owners” (BIS). There are an estimated 70,000 in the UK, contributing £24bn to the economy and employing about a million people. It’s a model that is growing fast, with social enterprises more likely than comparable SMEs to report an increase in turnover last year. All stats are from the 2013 The People’s Business Report compiled by Social Enterprise UK.

So, what motivates the social entrepreneurs who choose this business model? What are the socio-political, fiscal and legislative conditions that encourage social enterprise development and what are the implications of a social enterprise economy for global sustainability? These are all questions in need of an answer.

Zebra Collective is a Plymouth-based social enterprise which has recently celebrated its tenth birthday. The founding members were, and still are, motivated by social justice; the desire to challenge inequality and make a difference in the world. They chose to do this by creating a worker co-operative which improves lives directly through community development projects and indirectly by training staff in service-providing organisations. They describe themselves as a value-driven organisation. Values are complex – they operate at the boundary between self and society, mediated by both and the interplay between the two. Two decades of cross-cultural research into human values have provided us with a good understanding of the patterns they typically take; patterns which present even more interesting questions in relation to sustainability and social entrepreneurial motivation. 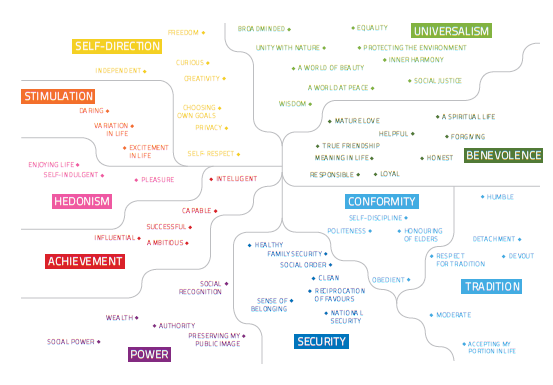 It seems that the values which are close to each other on the diagram are complementary and tend be held simultaneously [1]. Values which are on opposing sides are thought of as being in conflict with each other and are not usually held together. Look at the axis which runs from social justice, protecting the environment and equality through to social power, wealth, ambition and influence. Does this mean that people who are motivated by social justice and sustainability are less likely to be ambitious and driven? Less likely to be successful? Might that explain a few things about the multiple social and environmental crises we find ourselves in? Are we fundamentally predisposed to be motivated either by social good or personal success, but not both? And if so, what about the very many people, often social entrepreneurs, who are ambitious, goal oriented, influential and passionate about social justice?  What can their value orientations tell us that might help in the quest for sustainability? This is one of the research questions I have been pursuing.

Whilst individual values are relatively stable, changing little over a lifetime, there is no doubt that they are also culturally influenced. It has been suggested to me that as society has changed in the decades since Schwartz did his seminal work, maybe value patterns have altered too. It was speculated that the rise of individualism and entrepreneurialism (or maybe the decline of the communist vs capitalist worldview) has caused a subtle shift in value patterns. This links to another of my earlier questions: What are the cultural, socio-political, fiscal and legislative conditions that encourage social enterprise development?

Charles Leadbeater in his work on co-operation offers some insights in this video and report. In particular, he talks about altering the structural conditions which “crush” co-operation. These are, quite possibly, the same structural conditions which institutionalise the values pattern in the diagram above, amplifying the practical and perceived differences between self-transcending and self-enhancing values and helping to steer each of us to make choices between them.

The recent series of Beyond Capitalism? lectures hosted by Plymouth Business School  (next one on 30th January 2014) has also kicked off some provocative discussions but there is much more work to be done.

I suspect that the phenomenon of social enterprise, currently receiving lots of popular attention but which, as any passing academic will point out, lacks clear definition or substantive theoretical underpinning is of value precisely because it is an anomaly in relation to our current understanding of how the world works. I wonder whether one day all enterprise will be social enterprise - combined social, environmental and economic purposes will be the norm and the aim will be the overall creation of value across these domains. Our current ideological and institutional bias towards the creation and capture of economic wealth; and even our belief that this is the best way to generate societal wellbeing and environmental sustainability may well be concepts that, like others before them, will one day be resigned to history.

[1] For more on this see e.g. Schwartz, S. H. (1992). Universals in the Content and Structure of Values: Theoretical advances and empirical tests in 20 countries. Advances in Experimental Social Psychology, 25, 1–65