Can you think of a single image that represents sustainability? A rainforest, river or building?

We’ve had a similar dilemma here in the ISSR. How do you portray all of the expertise the institute has to offer without using a photo which over-represents one area? We use a different photo for each area of research expertise and combine them into one holistic collage. It’s important to get a great visual representation of each area of expertise as it’s used on our website, in publications, at events, on social media and even on lamp post banners around the campus! So often we get asked to choose one image which represents the ISSR and sustainability – but sustainability and research is so varied, and has many different parts to it, that finding one good image proves to be a real challenge. 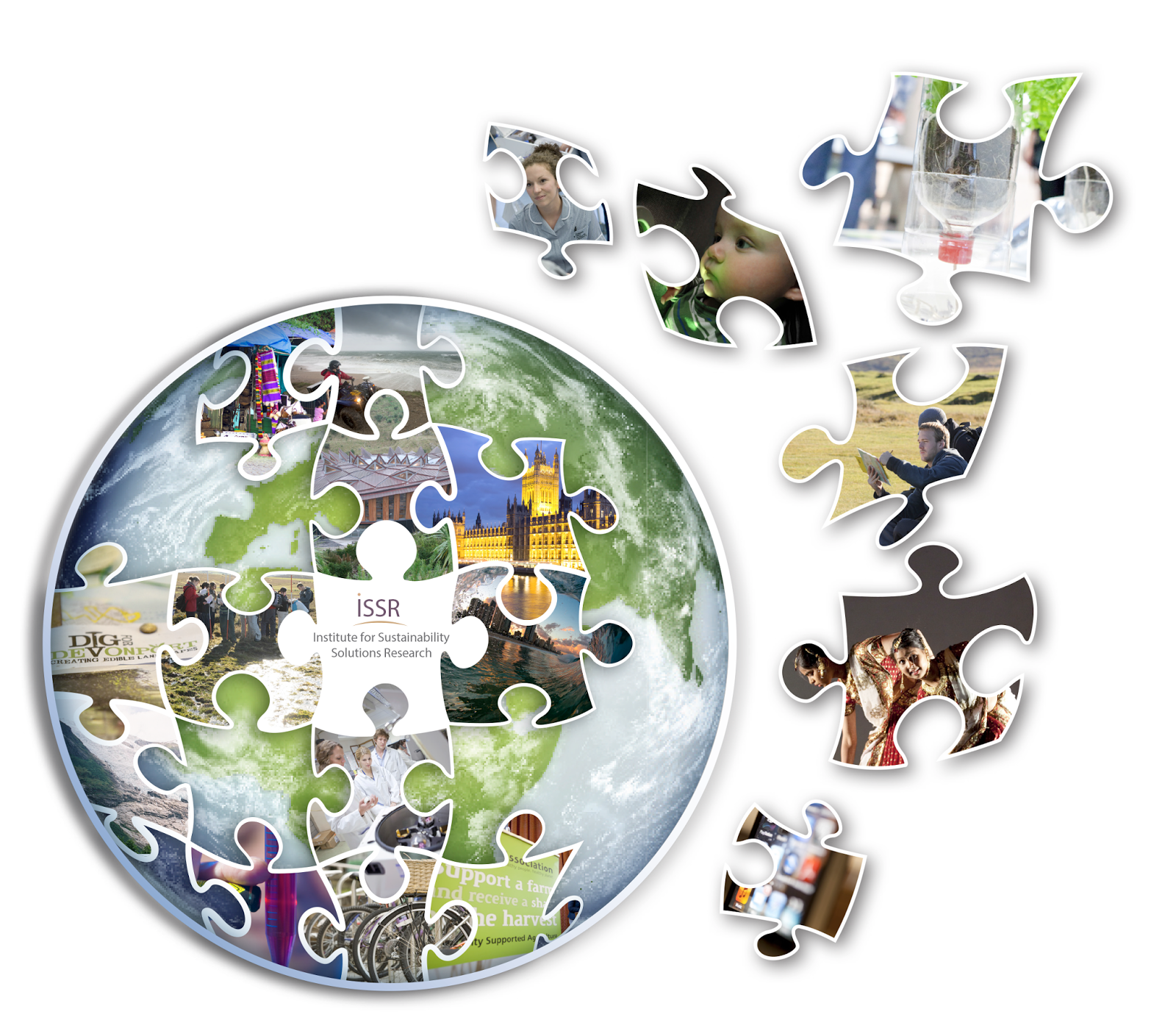 A similar project that we’ve worked on in the ISSR was to produce lamp post banners which highlight the three key areas of sustainability at Plymouth University; research, teaching and learning and the day-to-day operations of the campus.

For the research banners we used the images which represent our areas of research expertise, such as this hand held thermal camera which is used by the Environmental Building Group to look for cold and hot spots on a building.

For the teaching and learning we used images of teaching taking place such as this image of Larch Maxey teaching in one of the gardens at the University.

For the campus operations we used photographs of the technology put in place to make University buildings sustainable such as solar thermal technology which used the sun’s energy to heat water. These photographs work well since usually the technology depicted is usually behind closed doors or on roofs of buildings so you wouldn’t usually see the equipment. These photos provide a hidden snapshot into Plymouth University as a sustainable campus.

Is this "my best shoot"? That's hard to say. But I do know that nothing I've ever done has addressed a more desperate matter. (Joel Sternfeld, 2013)

Photography and film could be a persuasive way of getting people to do something about the impact they’re seeing (Sheppard, 2005). However, as Doyle (2007) argues, visualising climate change through photography has its drawbacks; some changes are unseen and time will keep passing. Also, as argued by Carbon Brief (2012) some images are overused and have simply lost their impact and meaning (think polar bears stranded on ice, images of flooding from the future and the Earth bursting into flames).

See below for a section of projects, exhibitions and photographers who have used their cameras to capture climate change and sustainability.

Eye on Sustainability
In June 2011, Vale and National Geographic launched a photography competition about sustainability. The competition had three categories – Wonders, Challenges and Solutions and had to include images to represent sustainability from a social, environmental and economic perspective. They received over 3,000 photographs from all over the world.

Hard Rain
In 1969, Mark Edwards became lost on the edge of the Sahara Desert and was rescued by a Tuareg nomad who famously played Bob Dylan’s song ‘A Hard Rain’s A-Gonna Fall’ on an old cassette player.

Mark Edwards took each line of Bob Dylan’s song and fitted images of change and sustainability to them. The photographs alone are truly moving but Dylan’s lyrics along with them make them extremely haunting.

The Hard Rain exhibition came to Plymouth University in 2012, accompanied by a lecture by Mark Edwards.

James Balog and Chasing Ice
The National Geographic assigned James Balog with the mission of capturing the Earth’s changing climate in the Arctic. In 2005, James set off as a sceptic on climate change, but his trip changed this. He witnessed first-hand the changes happening to the climate and his beautiful landscape videography and photos will show how the planet is changing at an alarming rate – one second it’s there and the next it’s gone.

Visit the Chasing Ice Film website for more information. You can also visit James Balog’s website for some amazing pictures and listen to his TED talk here.

When climate change sinks in
In 2005, Joel Sternford was in Montreal attending the United Nations Climate Change Conference. The conference is an annual meeting of countries that are party to the Kyoto Protocol, which is aimed at reducing the emission of greenhouse gases. He says “I tried to capture the moment these delegates woke up to the full horror of what they were hearing.” So often climate change gauged by looking at the landscape around us, but Joel has captured the emotion in the faces of people who realise climate change to be a significant issue.

To read more visit the story on the Guardian’s website

His travel, the people he met and his landscape photography has “led him to turn his lens on the most important issue facing humanity, Climate Change.” He focuses on social, energy and environmental sustainability.

Our Landscape in Flux
Photographer Stuart Franklin documents climate change across Europe. Footprint: Our Landscape in Flux, describes his journey, capturing the impact of the environmental crisis. The 10 images on the Guardian’s website are his favourite from his book.

To read more visit the story on the Guardian’s website

Human impact on Poland's environment seen from the air
Kacper Kowalski is an aerial photographer and pilot. His book: Side Effects, shows the effect humans are having on his native Poland. His stunning aerial photography is almost abstract, making you really concentrate and wonder about the photo. His images include frozen rivers, wind turbine blades and woodcutters.

‘Red Ice-White Ice’ – Chris Wainwright
As part of the Cape Farewell project, Chris Wainwright went to Greenland and captured some amazing images of icebergs. He took the photos using red and white flashes to portray the temperature changes taking place. This technique anthropomorphises the icebergs to give them flesh and book, and emphasises the world as a living organism.

“A picture is worth a thousand words”

For me, photography is a great method of communication to show the impacts climate change is having on the world. It’s great when people have original and playful ideas on how to capture our changing planet, but for me we have to be careful not to use cliché images such as polar bears of floods. I don’t think these images have the same sense of wonder, amazement and shock the way the photographers detailed in the previous section do. They don’t evoke emotion in the same way as The Hard Rain project, or show emotion as well as Joel Sternford’s photos at the United Nations Climate Change Conference.

Capturing sustainability through photography will always be a difficult and challenging thing to do, after all, the world just does not fit conveniently into the format of a 35mm camera.

Kirsty Andrews is the Marketing and Communications Administrator for the ISSR